Stop by the library to find a good book, study alone or with a group, read or visit quietly with friends. If you need help finding a good book or with research, don't hesitate to ask!

Visit the ICS Library Power School Learning (PSL) page for LWSD Database Links, On the Library PSL page you will find usernames and passwords as well as instructions for accessing KCLS databases.

COVID-19 Stay-at-Home Tech Support Update:  Please email Mrs. Peterson if you are having issues with your laptop. Depending on the problem, we may be able to troubleshoot for a fix quickly or submit a HelpDesk ticket for you. For hardware issues (cracked screen, lost power cord, LWSD-issued hotspots, etc.) families may contact district help directly at ftaccess@lwsd.org.

A common issue some students are having is that laptops won't connect to the direct access server (you might just get the spinning circle saying "connecting" indefinitely). Here are some hints from our HelpDesk Wizards:

1) RESTART the laptop twice (NOT shutdown, but Restart)
2) Let it set on the login screen for about 10 minutes.
3) Login and let it set for another 10 minutes.

Visit the LWSD Technology Help Page or stop by the library for laptop help. Information about purchasing insurance is on page 6 of the Laptop Handbook.

Need help finding just the right book? Here are some links to get you started. Please note that since we are a middle and high school library, not all books on these lists are right for every student. Check the age level recommendations to make sure a book is right for you.

What Should I Read Next Bookfinder

Battle of the Books is a cooperative effort between Inglewood, Rose Hill, Kirkland, Finn Hill, Evergreen, Redmond, International Community and Kamiakin Middle Schools. This program allows 6th, 7th, and 8th graders in each school to work together as a team and challenge other schools to correctly answer questions about the selected books. The goal is to encourage students at all reading levels to engage in teamwork while reading some of the best in children’s literature. Challenge questions are based on specific and factual information within the books.

Our 2019-20 BOB Challenge was held at Rose Hill Middle School on March 3. Our ICS team did great and we can't wait for next year! Below are the books we read for this year's competition. Books for the 2020-21 LWSD Battle of the Books will be announced later in the spring. 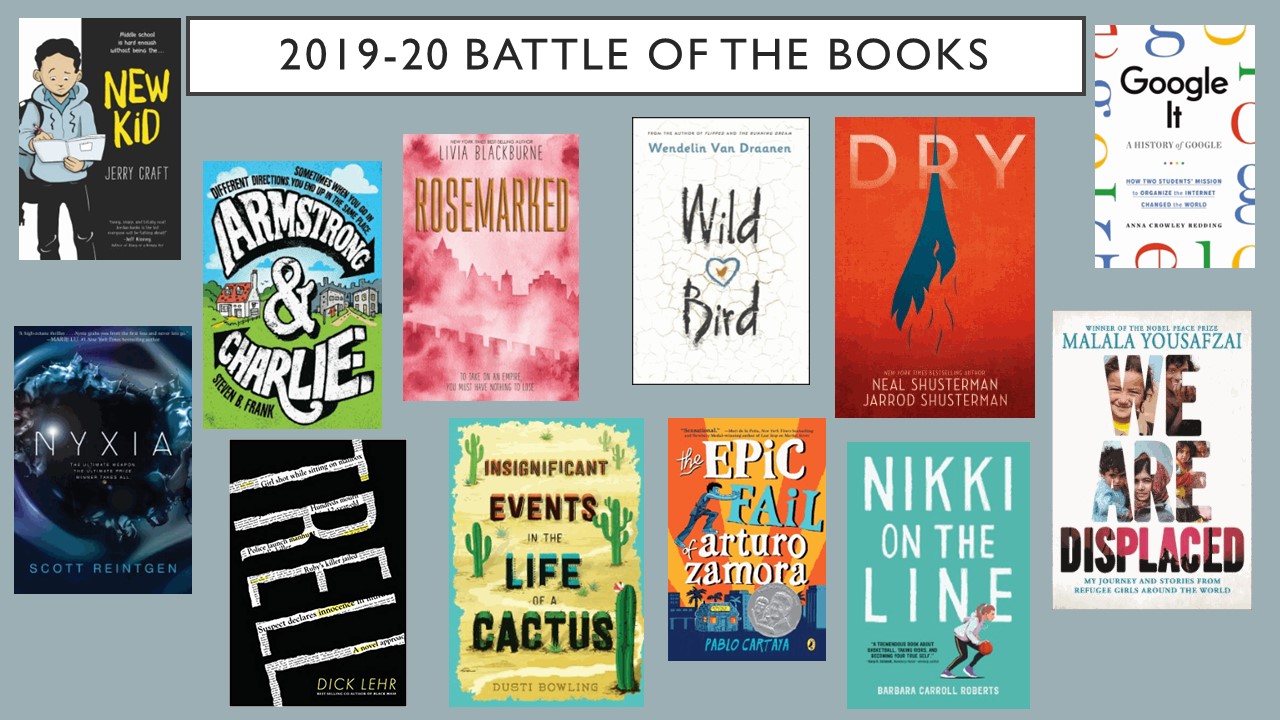 Armstrong and Charlie by Steven B. Frank: During the pilot year of a Los Angeles school system integration program, two sixth grade boys, one black, one white, become best friends as they learn to cope with everything from first crushes and playground politics to the loss of loved ones and racial prejudice in the 1970s.

Dry  by Neal Shusterman and Jarrod Shusterman: A lengthy California drought escalates to catastrophic proportions, turning Alyssa's quiet suburban street into a warzone, and she is forced to make impossible choices if she and her brother are to survive.

The Epic Fail of Arturo Zamora by Pablo Cartaya: Tells the story of Arturo, who is looking forward to a relaxing summer until Carmen, a cute and funny girl moves into his apartment complex and while he deals with his stomach turning into a deep fryer over a girl, a smarmy land developer rolls into town and threatens to change it.

Google It: A History of Google by Anna Crowley Redding: Larry Page and Sergey Brin started out as two Stanford college students with a wild idea: They were going to organize the world's information. From that one deceptively simple goal, they created one of the most influential and innovative companies in the world. The word “google” has even entered our vocabulary as a verb. Now, find out the true history of Google, from its humble beginnings as a thesis project made out of “borrowed” hardware and discount toys through its revolution of the world's relationship with technology to a brief glimpse of where they might take us next.

Insignificant Events in the Life of a Cactus by Dusti Bowling: Aven Green loves to tell people that she lost her arms in an alligator wrestling match, or a wildfire in Tanzania, but the truth is she was born without them. And when her parents take a job running Stagecoach Pass, a rundown western theme park in Arizona, Aven moves with them across the country knowing that she'll have to answer the question over and over again. Her new life takes an unexpected turn when she bonds with Connor, a classmate who also feels isolated because of his own disability, and they discover a room at Stagecoach Pass that holds bigger secrets than Aven ever could have imagined. It's hard to solve a mystery, help a friend, and face your worst fears. But Aven's about to discover she can do it all . . . even without arms.

New Kid by Jerry Craft: Seventh grader Jordan Banks loves nothing more than drawing cartoons about his life. But instead of sending him to the art school of his dreams, his parents enroll him in a prestigious private school known for its academics, where Jordan is one of the few kids of color in his entire grade. As he makes the daily trip from his Washington Heights apartment to the upscale Riverdale Academy Day School, Jordan soon finds himself torn between two worlds--and not really fitting into either one. Can Jordan learn to navigate his new school culture while keeping his friends and staying true to himself?

Nikki on the Line by Barbara Carroll Roberts: Nikki, thirteen, dreams of being a great basketball player but struggles on her new, elite team while also juggling school stress, her non-traditional family, and revelations about her biological father.

Nyxia by Scott Reintgen: Emmett accepts an interstellar space contract but learns en route that to win the promised fortune he and nine other recruits face a brutal competition, putting their very humanity at risk.

Rosemarked by Livia Blackburne: A healer and a warrior embark on a dangerous mission to fight against a brutal empire.

Trell by Dick Lehr: Determined to clear her father of the wrongful conviction for a gang-related crossfire death, thirteen-year-old Trell persuades a reporter and a lawyer to investigate the case and uncover the truth.

We are Displaced: My Journey and Stories from Refugee Girls Around the World by Malala Yousafzai: Malala's experiences visiting refugee camps caused her to reconsider her own displacement -- first as an Internally Displaced Person when she was a young child in Pakistan, and then as an international activist who could travel anywhere in the world except to the home she loved. In We Are Displaced, which is part memoir, part communal storytelling, Malala not only explores her own story, but she also shares the personal stories of some of the incredible girls she has met on her journeys -- girls who have lost their community, relatives, and often the only world they've ever known.

Wild Bird by Wendelin van Draanen: 3:47 a.m. That’s when they come for Wren Clemmens. She’s hustled out of her house and into a waiting car, then a plane, and then taken on a forced march into the desert. This is what happens to kids who’ve gone so far off the rails, their parents don’t know what to do with them anymore. This is wilderness therapy camp. Eight weeks of survivalist camping in the desert. Eight weeks to turn your life around. Yeah, right. The Wren who arrives in the Utah desert is angry and bitter, and blaming everyone but herself. But angry can’t put up a tent. And bitter won’t start a fire. Wren’s going to have to admit she needs help if she’s going to survive.

Do you use Common Sense Media? CSM has always been a great resource to provide age-based media reviews for families for books, movies, apps & technology and more. They now have added some thoughtful coronavirus resources for parents as well. Look for the link on the top-right of the main Parent Resource Page

Want some reading suggestions for your student during this unexpected time at home? Use the "Need to Read" tab above for reading suggestions and best books lists. I have 3 years of book recommendations on my Instagram and Twitter accounts as well. Instagram: mrs.peterson_librarian or Twitter @MrsPetersonLib

I'll be posting more links and resources over the next few weeks. Please contact me if you have questions or need further resources.

Suggestions for parent reading below! 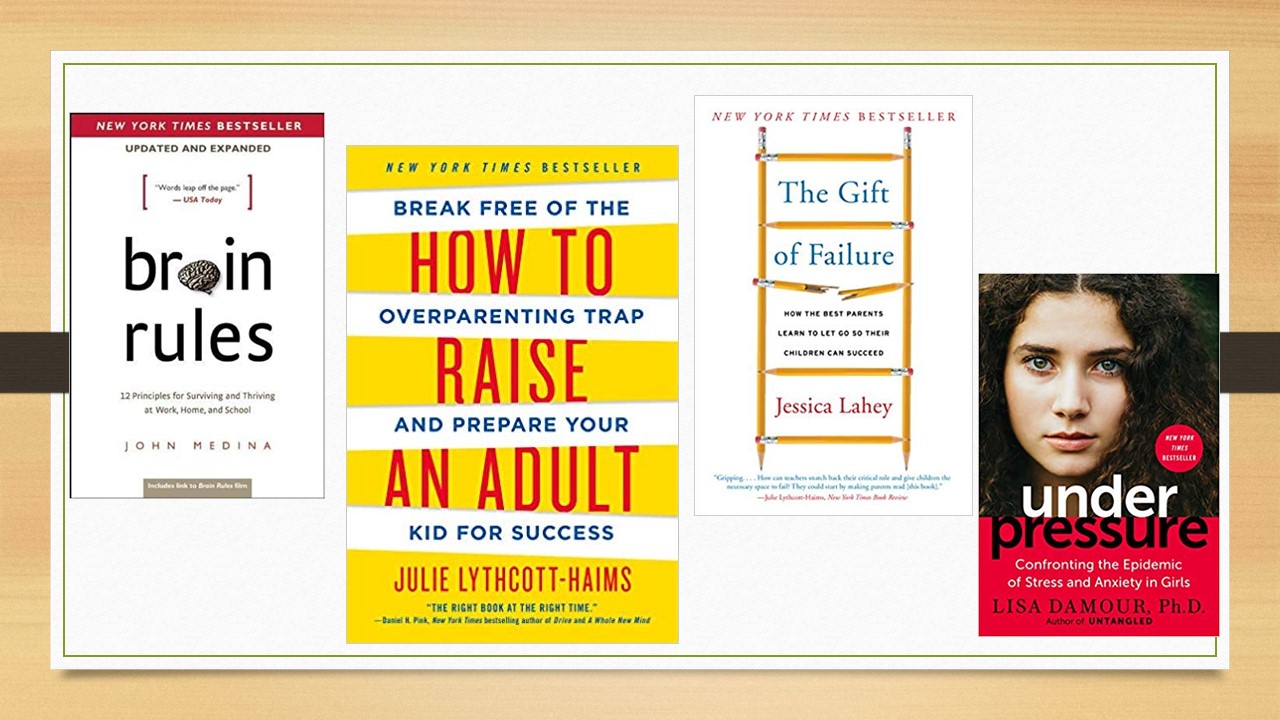 Thank you to the Kirkland Youth Council and Comics For Community, Compassion and Culture (C4C3.org) for supporting the ICS Library!

Thank you also to the ICS PTSA for their generous support of the ICS Library. With the PTSA's support, we were able to purchase many fiction and non-fiction titles for our growing collection! 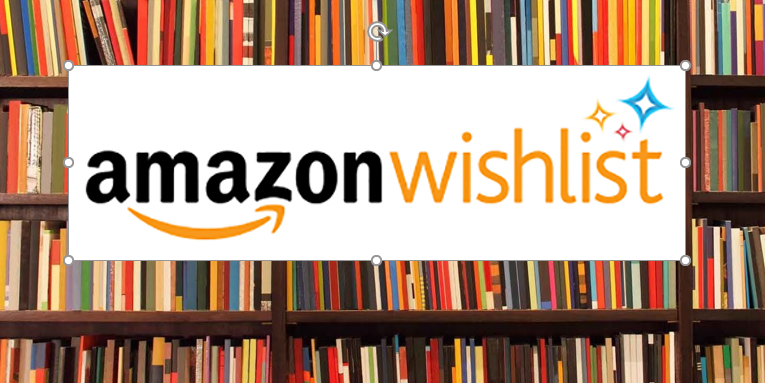